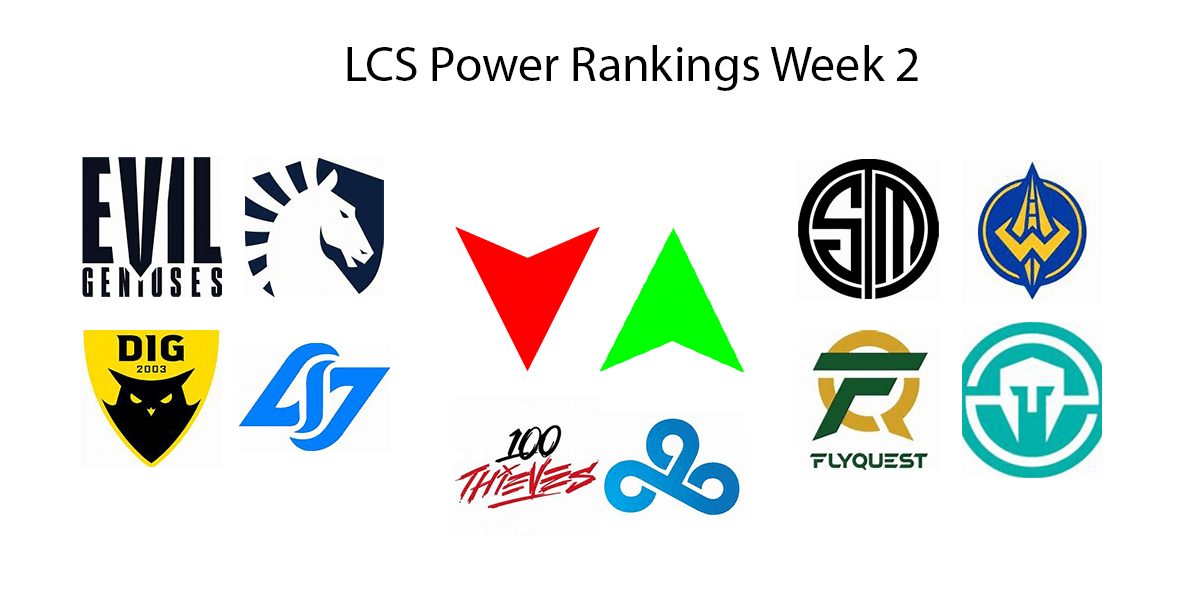 After week 2 we got a better look at what teams are the real deal and what teams may not be. While it is still very earlier in the season you get the feeling the standings will likely stay pretty similar to where they are now. With that being said lets take a look at our LCS Power Rankings Week 2.

Even further they fall. Luckily for CLG they can’t get any lower on our power rankings next week. Sadly they sit at (0-4) and look to be clearly the worst team in the league. The split decisions continued for CLG. Sending two mid to get a tier one tower while your tower and inhibitor fall is questionable at best. While they had already lost most map control by that point it just hurts to watch, They do have a seemingly easier week coming up with EG and Immortals so hopefully they can get their first win.

The Guardians did well to pick up a win this past week. Sadly they also lost to Immortals which pretty firmly will keep them at the bottom. I still stand by that they should play through Hauntzer as much as possible. Even though he had a bad score line on Fiora his presence was very much felt throughout the map. The Guardians should look to work on their draft giving them better situtaions across the board though.

EG had a terrible week going (0-2). Svenskeren again didn’t have the best week. I’m also not really sure about the Sona pick either. This team just brings a bunch of questions to my head when I think about them. I hope Svenskeren can pick up his game and be a shining point for EG. Until he does that I think they will continue to struggle.

Immortals took a lashing from Cloud9 which to be fair I think was expected. Luckily for them they went up against Golden Guardians on their second day of play. Getting the win over GG is big for Immortals to try and separate them from the bottom more and more. I still don’t have much faith in this team. Altec did have a big game against GG and he could be a bright point for them as they go on.

As week 2 went by 100 Thieves stayed the same. Their game against CLG went well for them and they seemed to control the game almost the whole time. That being said CLG is sitting at (0-4) so you’d hope to look good against them. I said it last week and I’ll say it again. Nothing about this team really jumps out to me that they deserve to be any higher or lower on our LCS Power Rankings Week 2.

Ah TSM, it’s good to see TSM have a (2-0) week after their rough week one. I think it’s safe to assume TSM will continue to play well and rise in the standings. They will have a tough opponent in Dignitas, but should look to get an easy win over the Golden Guardians. Everyone on TSM had their moments this past week and the team as a whole looked a lot better than in week 1.

Team Liquid continues their 50/50 record going into week 3. As you all probably know TL is still playing with a sub jungle in Shernfire. The not so good news is that the Broxah situation will probably continue on longer that originally thought. News on the matter is supposed to be coming out soon though. Other than that TL looked ok in both games they played and hopefully they can get Broxah soon.

DIg picked up a huge win against TL in week 2. They played well throughout the whole thing and showed they can play with good competition. That is until we saw the FlyQuest game. Hopefully that game was a one off, but it was rough to say the least. Huni seemed to get tilted and put the team in bad situations after a bad start to the game. Dig will also has a tough week coming up playing TSM and Cloud9. I think Dig will come back after the FlyQuest game and play well in week 3.

FlyQuest like Dignitas looked really good in one game of the week but terrible in the other. Unlike Dig FlyQuest got absolutely handled by Team Liquid. In response they came back and beat Dignitas. This team can obviously play well but with time I think the team will fall into 3-5th positions. But until the teams around then move up they will stay near the top.

Cloud9 had another great (2-0) week. They easily look like the best team in the league. Zven has gone deathless in the first four games of the season. Cloud9 also has the shortest average game time clearly showing they know how to end a game when they have a lead. Expect C9 to stay at the top of any power rankings throughout the scene.

Do you think anyone has a chance of taking down C9? We want to know what you think of our LCS Power Rankings Week 2. As well as be sure to check out the games live here. Finally don’t forget to check back every Thursday to see how our rankings change throughout the season.