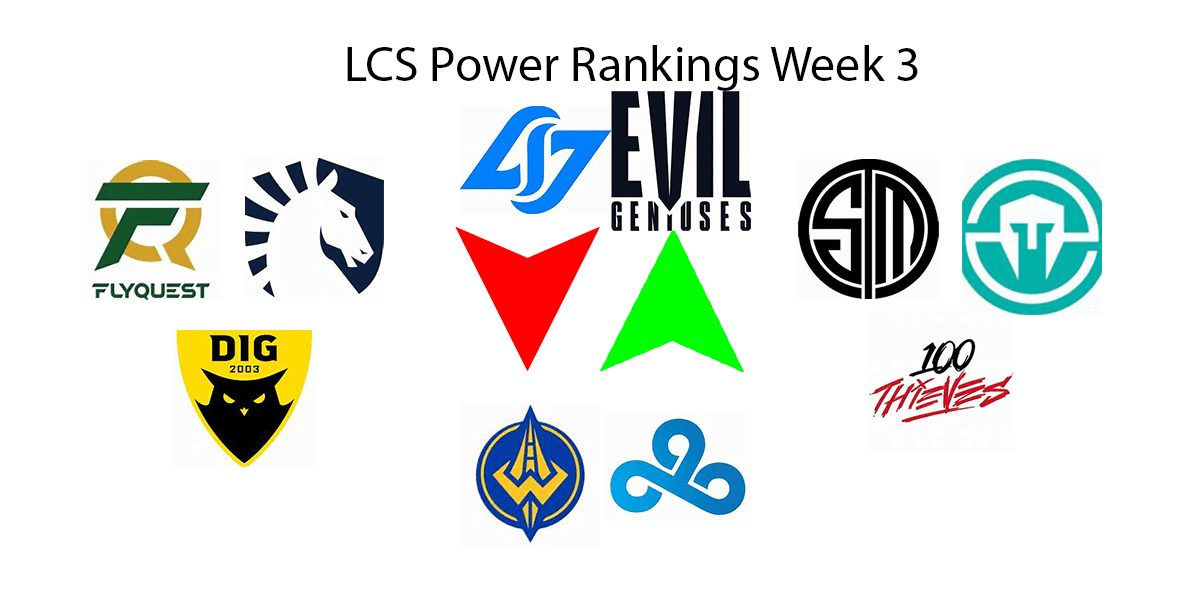 Immortals and TSM on the rise while TL and FlyQuest continue to fall. This weeks LCS Power Rankings are being posted late due to me being sick all week. This time we will make it short and sweet but get back to normal next week. With that being said lets take a look at our LCS Power Rankings Week 3.

Well CLG finally got a win so that’s good right? Obviously still a lot to be fixed within this team and I just don’t see it happening anytime too soon.

GG got a huge win over Team Liquid this past week for their second win of the split. Obviously this win could be extremely helpful for standings if the team can get everything together and try and make a run for playoffs however unlikely.

On one side of the coin EG managed to beat FlyQuest which had to feel good. On the other they handed CLG their first win of the split as well. I feel EG has such potential yet just hasn’t lived up to it.

Is this maybe a little overboard, possibly but having an (0-2) week doesn’t look good. Also the excuse of not having Broxah clearly isn’t all that is wrong with TL. Sloppy plays all around have people starting to worry. Good news for TL is that they are getting Broxah this week and that hopefully can solve some of their problems.

While the loss to C9 is excusable the loss to EG is not. Fly started the split getting wins and looking pretty good. While I never had the most faith in Fly their record was too good not to buy into the team at least a little.

The Thieves finally moved up a spot on our LCS Power Rankings in week 3. After sitting at 6 for the past three weeks they finally give me reason to move them. The win over TL again just like for Golden Guardians can end up meaning so much. The Thieves are doing well enough to keep themselves in the top half of teams and hopefully for them they can stay that way.

While Dig had an (0-2) week it was against probably the best two teams in the LCS as of now. While their losses also didn’t look that good they still seem to be at least a little bit better than the teams lower on this list.

The Immortals are making it work. I for one was not expecting Immortals to have this good of an opening to the split, already having more wins than I predicted for their full split. The veteran talent on this team just lead this team to play the mid game so well they continue to win. While I don’t have the highest hopes this team will continue this form until they stop they will be at the top which they’ve earned with their record.

While not the hardest week for TSM they continue to win and look good doing it. The willingness to make plays in the mid game also have many TSM feeling very good as that’s where they’ve been weak in the past.

They stay undefeated and clearly at the top. C9 have many believing they are head and shoulders above any other team in the LCS. This statement will be put to the test this week as they face TSM.

Again very sorry about the late and short post as compared to normal. Do you think TSM has a chance against C9? We want to know what you think of our LCS Power Rankings Week 3. As well as be sure to check out the games live here. Finally don’t forget to check back every Thursday to see how our rankings change throughout the season.