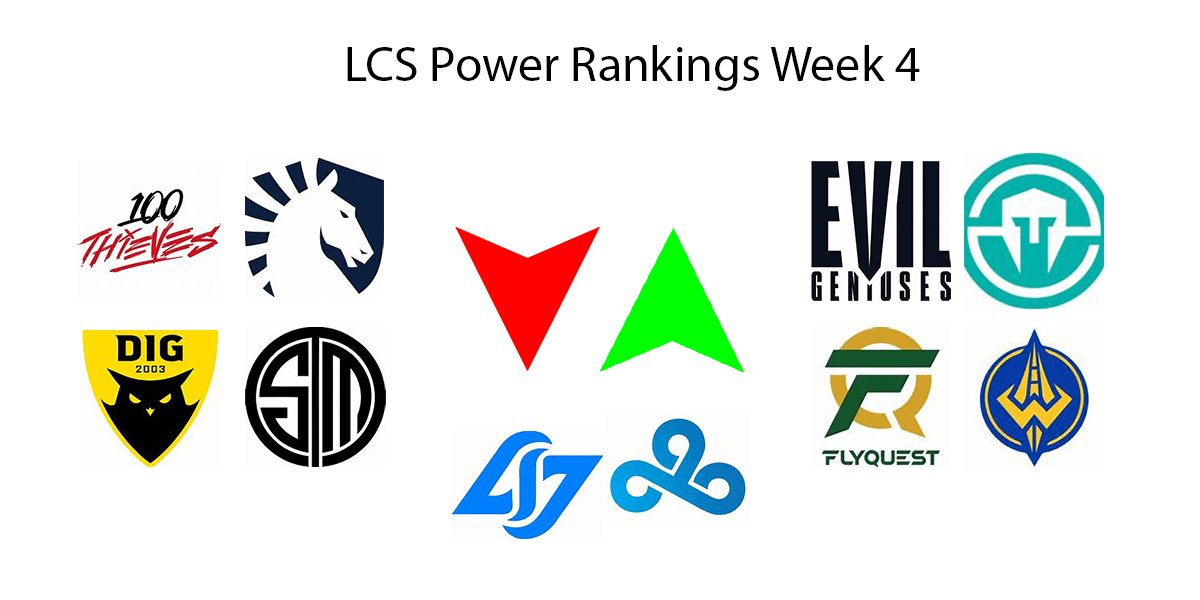 The Immortals and Cloud9 stay near the top while the rest of the league struggles to figure out if they want wins or not. This is LCS Power Rankings Week 4 has been hard to try and make. Other than C9 being at the top and CLG being at the bottom, no teams have played consistently. With that being said I’ll try and make sense of the power rankings the best I can.

What seemed like an easier week and CLG still managed to lose both again. This team honestly just looks terrible. Crown is not playing well at all, even throwing a windwall backwards in the game against TL. But then again it’s not just him. The sad part is the whole team just looks bad. Hopefully they can recover and find something that works for them and just look toward the next split.

Oh have the mighty have fallen. While TL did pick up a win this week it was against easily the worst team in the league in CLG. Like I assumed the addition of Broxah in the lineup didn’t fix all of their problems if any. TL got completely controlled by Immortals much in part to Xmithie having a great game. That can’t feel good as Xmithie was the one replaced by Broxah. While they don’t look the best now I do believe TL will get themselves on the right track, there is much to much talent to stay this bad.

I guess that’s what I get for moving the Thieves up one spot last week. Maybe it was my sickness but I had a little hope for the Thieves. Clearly they proved me wrong with their (0-2) week. Meteos didn’t have the best week giving up a strange kill in a dive top lane that had zero chance of working. Not to mention bad pathing while behind. Ryoma also seemed to just be a nonfactor as well.

EG did manage to take down the Immortals giving them only their third loss, but stood no chance against the steamroll of a team in C9. Kumo played very well in the win against Immortals and I think he may be a good rock for the team to play around going forward. I still have hopes for this team to be good with the exciting players they have, With really no other teams other than C9 looking unbeatable EG could very well still make playoffs if they get their play together.

Why can’t Dig be consistent? They played a very good game meta comp in the game VS 100 Thieves. Then in the game VS Golden Guardians the whole team looked disjointed after getting down early. Dig seem like if they get down early they almost just tilt and that’s sad to see. With such a good start to the season they can’t be feeling good about where they are now. If they can get a (2-0) week I feel that they could again ride that momentum and climb back up the standings.

A big (2-0) weekend has to feel so good for Keith and the Golden Guardians. I say Keith specifically because he got so much hate directed toward him for taking the support position. Keith also played really well this past week showing improvement from the very beginning of the season. FBI also stepped up and played really well. With the bot lane playing at a good level you feel that GG is actually a full team not just a top side of the map. I personally want to see this team succeed and it seems like they actually can.

Definitely not the week TSM was looking to have going into our LCS Power Rankings Week 4. That being said they did have some tough opponents in FlyQuest and C9. I do still like the flexibility with this team. They are not afraid to move picks around and try things new. This obviously may not always work out for them but it gives them more diversity going further in the split. Broken Blade has been looking really good these past weeks which bodes well for TSM as a whole. Going further expect TSM to stay near the top if not compete for first.

Just like that FlyQuest is back near the top. The win over TSM could do quite a bit near the end of the split with playoff implications assuming both teams make it. Fly did well to play around drakes in both games. Even getting a 23 minute sole against 100 Thieves. While Viper has been looking the best Ignar has played a different champion each game and has looked good doing it. This team is almost a sure top 4 team for me even until the end of the season if they continue to play at the same level they are now.

The Immortals probably aren’t happy dropping a game to EG as they could have had sole control of second place in the standings but I still assume they are happy with where their record stands. Like many others I am still not %100 convinced of how good this team really is. Obviously they’re not a bad team and they have put themselves in a good position to make playoffs. Only time will tell how good they actually are.

What really is there to say that hasn’t already been said. C9 are just running teams over. Everyone has been playing extremely well across the board. Sadly Zven picked up another death but when you’re talking about an ADC trying to get a 100 KDA that itself tells you what you need to know about how the teams playing. They do play Immortals next week who I still expect them to run over. If they do they put themselves even further in the lead with almost a guaranteed first place finish to the split.

It really is hard putting teams into an order that makes sense without leaning heavily on where they are in the standings. Teams truly seem to be closer together in skill then ever before in the LCS. With that being said do you agree with our LCS Power Rankings Week 4? As well as be sure to check out the games live here. Finally don’t forget to check back every Thursday to see how our rankings change throughout the season.