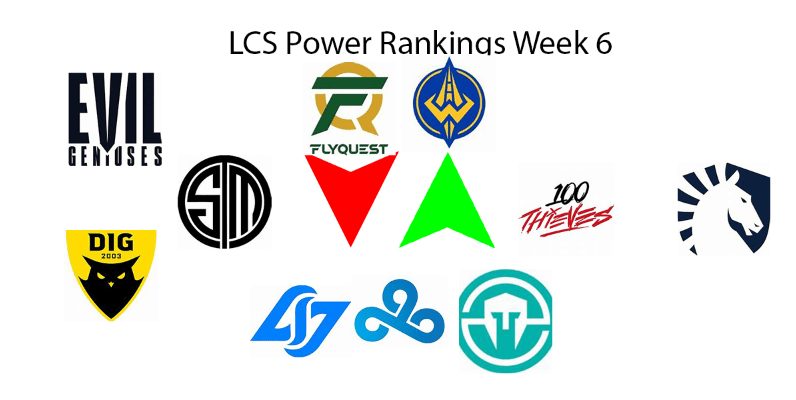 Another week another crazy turnout. With that being said five teams kept their same spot in our LCS Power Rankings Week 6. The most of any week by far. There are still only two games separating 3rd-9th while C9 sits four games above 2nd place. Even CLG picked up another win just to make things even closer. With all that being said let’s take a look at how our LCS Power Rankings Week 6 turned out.

Pobelter shows why he stepped in! Pobelter had a massive game against a long time CLG rival of TSM giving CLG just their second win of the split so far. While they are still struggling to really shine through they do look better if just by a little bit. This should give CLG fans hope. I do expect CLG to pick up at least 2 or 3 more wins before the end of the split, which after the first half has to look ok.

The Guardians also picked up a big win over the Immortals this past week. While they then went on to lose to EG the (1-1) week keeps them in the tie for 6th and a theoretical playoff spot. They will again play another team in that tie in Dignitas this coming week which feels like a must-win. It feels that way due to Cloud9 being their other opponent. The whole team did play really well against the Immortals not even giving up a single kill. Hopefully, they can keep the team-play up going into next week.

EG again went (1-1) while they probably would want more it keeps them in the tie for 6th. The team continues to be slightly inconsistent. Next week looks to probably be another (1-1) week for EG facing FlyQuest and CLG. With that being said CLG looks to be playing better. Some split plays still seem to plague this team and if they can get that under control they might have a chance to rise in the standings a little more.

Just like everyone else in this tie 100 Thieves went (1-1). They did pick up a big win against EG giving themselves another tie going (1-1) with EG overall on the season. That could play a big role in playoff seeding or making the playoffs in general. The Thieves will have a big opportunity this coming week playing Dignitas and the Immortals. Ryoma continues to be a question mark for me on this team. Don’t be surprised if someone came in to replace him in the future.

While Dig did go (0-2) this past week they played the best two teams in the league. I still think they probably are the strongest team stuck in this tie. It still stands that they need to get their emotions under control and hope Froggen can step back up and carry his team. If they can do that it’ll give me more hope going forward for this team.

TSM just doesn’t like to split weeks. Another (0-2) for TSM puts them in a weird spot only 1 game ahead of 9th while still being tied for 3rd. While I think the experimenting for this team is good that doesn’t seem to be where their main problems are. They’ve had some rough mid and late games as of late which is the last thing you’d expect from a TSM team. I’d recommend they stick to a few strategies instead of a different one every week as if nothing else just to clinch a playoff spot before it’s too late.

What do you know another team going (1-1), Immortals had a tough loss to Golden Guardians not even picking up a single kill and only 1 turret. They did manage to beat a CLG team who just came off their second win of the season. Just like 100 Thieves, the mid lane tends to be a point of weakness for the Immortals. They actually play the Thieves next week too. Don’t expect either team to play through mid lane.

Before we even get started with TL go read our article about the whole Tactical and Doublift situation here. Now that you’ve read that, holy Team Liquid looks good again. To many people’s surprise Tactical played wonderfully in his LCS debut. While it was a team effort he definitely pulled his own weight. TL managed to get a (2-0) week bring them out of one tie and into another. This tie though is for 3rd and that has to make the fans happy. TL is also moving forward with Tactical as the starting bottom laner going into this week. Maybe just maybe Cloud9 will have some real competition after all.

While FlyQuest stood no chance against C9 again they do hold 2nd place by two games. PowerofEvil continues to play well even pulling out the Qiyana. IgNar also seems to have made Turtle a better player. The two have played really well together allowing the team to succeed as they have. All around the team plays well around each other and it’s a refreshing turn of events having this team turn out to be really good. They are extremely likely to make playoffs and it wouldn’t surprise me at all if they made it a decent way into too.

They keep rolling (12-0) playoff-bound, this team has to feel good. C9 took down the 2nd place FlyQuest pretty easily as well showing even more how good they really are. As of now no one really seems to be able to challenge them and it may just stay that way all the way through. It would be fun for the fans to see a (16-0) so we can only keep our fingers crossed.

Can CLG play spoiler to more teams as we get closer to the playoffs or will they go back to their losing ways? TL also seems to be in a good place with Tactical starting over Doublelift. Only time will tell and I for one can’t wait to watch more LCS. With that being said do you agree with our LCS Power Rankings Week 6? As well as be sure to check out the games live here. Finally don’t forget to check back every Thursday to see how our rankings change throughout the season.