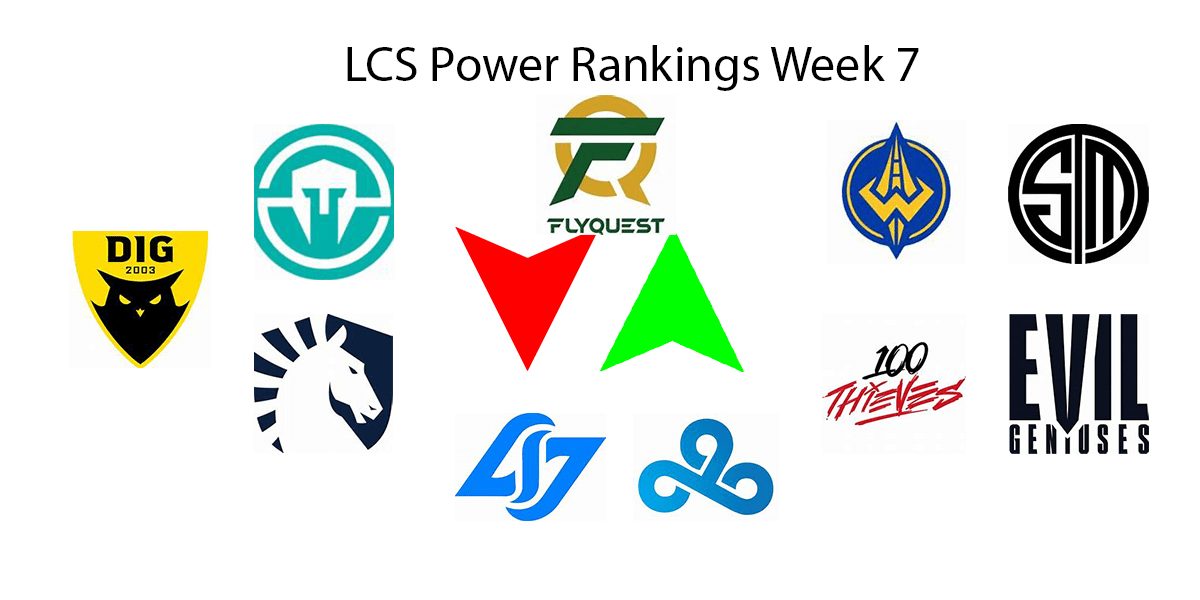 While MSI has been pushed back, nothing will stop the LCS from being crazy and unpredictable. There are still only two games between 2nd place and 8th. Also, Cloud9 finally took a loss. With all that being said let’s take a look at how our LCS Power Rankings Week 7 turned out.

This new look CLG is clearly not perfect by any means, but they definitely are going in the right direction. CLG picked up their 3rd win against TL of all teams. While this win doesn’t really do too much for CLG as they have no hopes for playoffs it does play a big part in possibly keeping TL out of playoffs. CLG also showed they aren’t afraid to play different picks, taking Janna top lane. Again I still see CLG picking up a couple more wins before the end of the split.

Dig took a harsh (0-2) week and things just don’t look good for them. What looked so good at the start of the split this team just doesn’t look good at all. I’m honestly at a loss for what this team can do to turn it around before it’s too late. Huni hasn’t looked good and neither has Aphromoo. If they want to turn it around it’ll have to be those two guys stepping up and playing better.

The Guardians are at least giving themselves a chance. They play TL this coming week which will play a huge role in who ends up making playoffs and who doesn’t. It is possible for sure and I for one am pulling for Golden Guardians. They do seem to improve every week. GG also did bench Keith for Huhi which in the grand scheme of things just feels bad for Keith. While it may be the best decision for the team as of now they did start Keith at the beginning of the split for a reason and a chance for him to grow as a support.

Maybe we jumped back on this team being good again too quickly, because oh boy did they not look good this past week at all. Tactical and Doublelift did split games but honestly, there are just so many problems with the team it almost seems they just need to stick with one roster and move forward with it no questions asked. It would feel bad as a fan to see TL not make playoffs after playing so well for so many years. Hopefully, they can get their stuff together going forward.

Immortals went (1-1) keeping themselves in a decent spot to make playoffs still. sOAZ got behind early in the game against 100 Thieves and from there it was pretty much open and shut. This worries me because I’m not sure if they can win games unless the whole team is playing at the best they can. They did pick up a big win over TL but in all honesty, it just seemed TL looked bad not exactly Immortals looking good.

EG has been looking better and better throughout the split. Everyone seems to be on the same page and they are taking games off of the top teams like FlyQuest. If the team can continue to play together and on the same page they have a good chance of getting a decent way into playoffs. EG also is just fun to watch when they are playing well.

The Thieves are up with the big boys again. They will need to play extremely well next week however as they play C9 and FlyQuest. They will also play TSM one more time before the split is done so they need to pick up every win they can. The Thieves have been playing well though and I think they deserve a spot near the top after their last couple of weeks of play. Meteos is back to god Meteos and that has to feel good for them going forward.

My oh my does this team make it hard to make a good LCS Power Rankings Week 7. To be fair they make it hard every week. Going from dropping games to CLG to taking down the top 2 teams in the league in back to back days. Obviously this team has so much talent and we know if they’re on form they can take on anyone. They just need to be more consistent. It also has to feel really good beating a Cloud9 that is still performing instead of one that looks a little “inty” near the end of the split.

Fly did have a rough week going (0-2) but the reason they stay at number 2 is because of the consistent play for them throughout the split. Obviously going forward they will want to stay away from the loss column. PowerofEvil also has shown himself to be one of the top Mid laners in the league. FlyQuest is also quietly pretty solid all-around in every role. Allowing themselves to play through just about everybody depending on the situation.

CLoud9 actually took their first loss. It wasn’t like C9 played poorly either, TSM just outplayed them. This isn’t necessarily the worst thing as they are a lock for playoffs and a high seed at that. Sometimes losing while playing well can help show you where you need to improve. Don’t expect this team to drop too many more games if any throughout the end of the split.

Will TL make playoffs or are their problems just too big to overcome. If so what can they do to fix the problems going into summer? Let us know what you think about the MSI postponement as well. Obviously the Coronavirus is taking the world by storm right now and the safety of everyone involved is more important than League. Do your best to keep healthy and let us know what you think about our LCS Power Rankings Week 7. As well as be sure to check out the games live here. Finally don’t forget to check back every Thursday to see how our rankings change throughout the season.